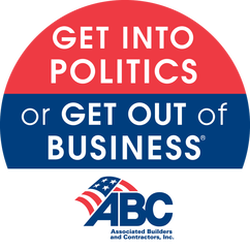 Associated Builders and Contractors, Inc. was founded in Baltimore in 1950 by a group of seven contractors whose belief in America's Free Enterprise System was in stark contrast to the prevalent compulsory unionism and government bureaucracy. The founders of ABC and its members today, believe that a contractor and their craft professionals should be rewarded and paid based upon the respective effectiveness and value that they bring to a project; that one should succeed or fail based upon one's merit. Members of ABC believe that free and fair competition is essential, and it requires a free market that operates without unfair constraints placed by special interest groups or governments.

ABC believes that professionalism is characterized by a commitment to achieve the highest standards of personal and company performance.

ABC values good corporate citizenship; That while companies should have the freedom to make decisions that allow them to pursue their desired business without unfair restriction, companies also have a responsibility to their employees and communities to provide economic opportunity, safe working conditions, and to contribute to the improvement of communities as places for families to live and work.

From its humble beginning just 60 years ago, ABC has grown to over 22,000 member companies nationwide representing literally millions of industry employees. Today with 70 chapters and its national headquarters next door to Washington DC in Arlington, Virginia, ABC is the fastest growing construction association in the USA. At the forefront of ABC is representation of the industry before local, state, and federal policy makers and providing the industry with the training tools and resources to develop the next
generation of construction craft professionals.

In Louisiana, ABC represents more than 600 member firms and some 80,000 plus employees through the Bayou Chapter in New Orleans and the Pelican Chapter in Baton Rouge. ABC in Louisiana maintains administrative and legislative staff and offices in Baton Rouge and New Orleans with training centers in St. Rose, Baton Rouge, and Westlake Louisiana where literally thousands of craft professionals have been trained, and where enrollment today is in excess of 2,000.

In the real world of construction, ABC's maxim "Get into Politics or Get out of Business" is true. The fact is, few businesses or individuals have the time or resources to monitor legislation that directly affects their industry in addition to the influence to get the attention of their law makers. Nationally, ABC has the time, the resources, and the means to do just that. At the state level, ABC is the construction industry's front line soldier.

ABC has a long history of success with the Louisiana legislature, having worked hard on such legislation as: Tort Reform, Right-to-Work, and Prevailing Wage Repeal. This benefit alone saves association members hundreds of thousands of dollars every year. Whether actively lobbying the legislature or just keeping abreast of legislation and regulations that affect their business, ABC members are given the tools to take action on legislation and the voice to lobby for change.